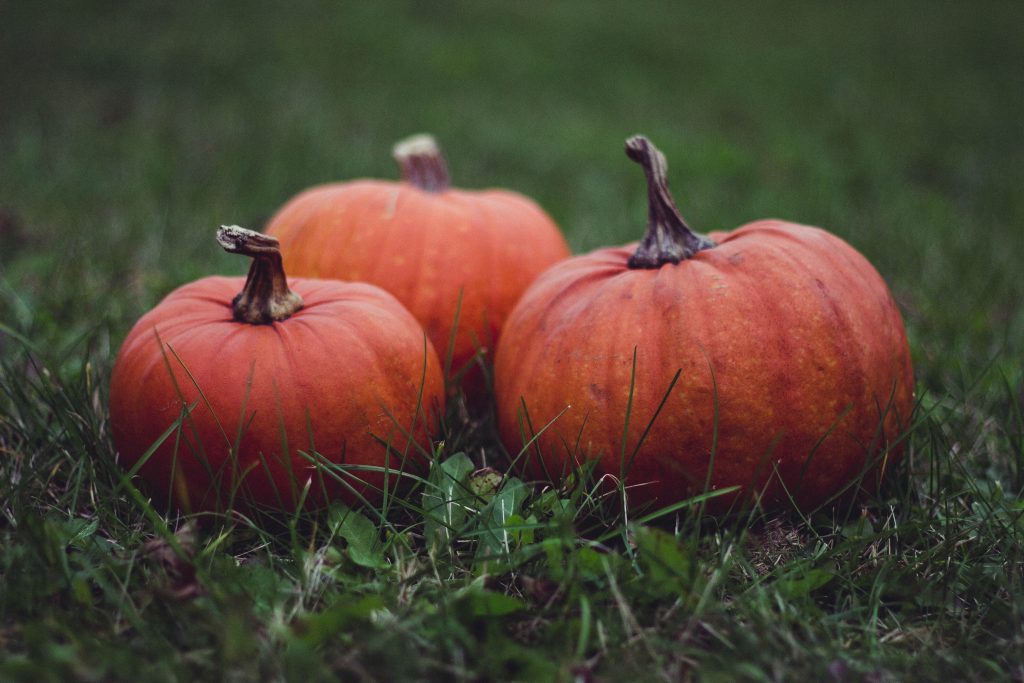 In the US and Canada, Halloween ignites visions of orange pumpkins whose eyes flicker and glow from the candle inside their empty carcasses, dancing skeletons, bobbing for apples, haunted houses, and grown-ups dressed up in gory costumes with fake blood dripping down their vampire teeth.

Halloween reminds us all of our childhood in which we’d gallivant around with empty baskets we hoped would be filled to the brim with sweets by the end of the night. It reminds us of our friends jumping out from behind every corner screaming “BOO!” at the top of their lungs, hoping with all their might that they might scare your socks off.

It brings back memories of binge watching scary movies with your friends, getting tangled up in fake spider webs, or “oohing” and “aahing” at the adorable young’uns in their ladybug costumes.

But what does this have to do with Summa Linguae Technologies?

What it comes to localization, it’s important to understand the cultures we’re localizing materials for, not only to ensure the meaning behind a phrase is correctly translated, but to understand whether a message will resonate correctly with the target audience. Your content therefore impacts the type of translation you need. You wouldn’t want to run a Halloween promotion in a country that doesn’t celebrate Halloween.

In honor of one of our favorite times of the year, we’ve decided to take a look at different days of the dead around the world. 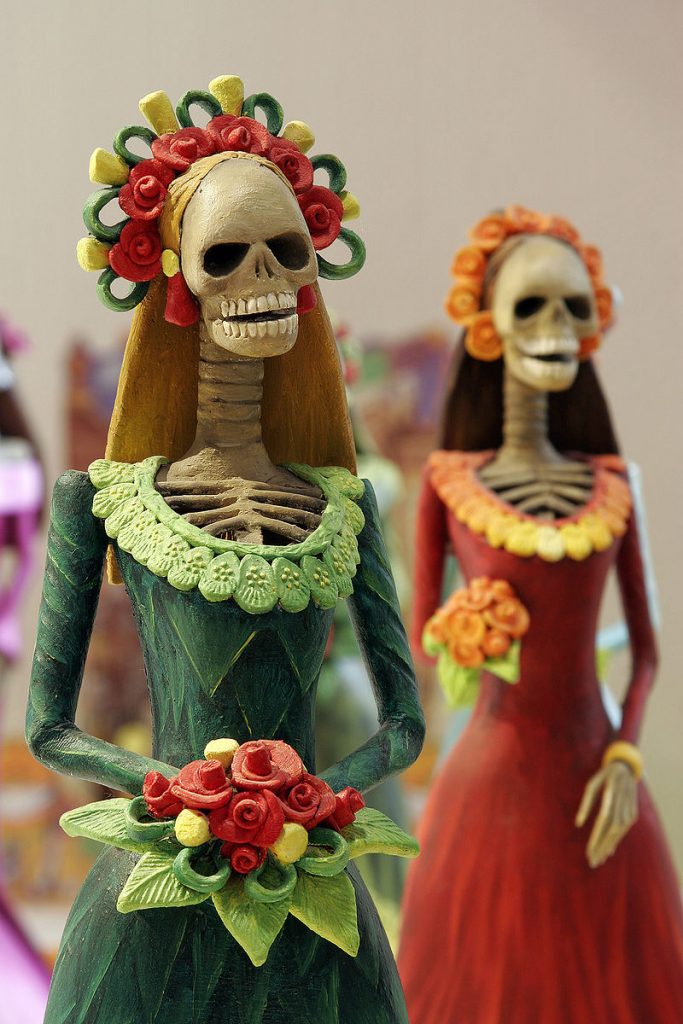 Dia de los Muertos (which translates to “Day of the Dead”) is a three-day festival which, although is celebrated in Latin America and Spain, is most strongly associated with Mexico, where the tradition originated.

Dia de los Muertos recognizes death as a natural part of the human experience; a continuum from birth, to childhood, adulthood, and then to the afterlife.

Those who celebrate Dia de los Muertos react to death with grieving and mourning, but also with happiness and joy; they live alongside death, respect it, and remember the life lived as a joyous one.

Like many of the festivals you’ll read about below, Dia de los Muertos is a time in which the boundary between the afterlife and life on Earth is blurred. The gates of heaven are opened at midnight on October 31, in which the spirits of deceased children are allowed to reunite with their families for 24 hours. The next day, the spirits of the adults come down to enjoy and frolic among the living.

This short-lived time of reunification goes all out to honor the dead with festivities and lively celebrations. On this day, the dead are once again a part of the community they helped to create and are awakened to celebrate hand-in-hand with their still-living relatives.

To celebrate, families make altars and place ofrendas (offerings) of food such as pan de muertos (bread of the dead) baked to perfection in shapes of skulls, skeletons, candles, and yellow marigold flowers. A photo of the departed soul is placed on an altar, and people paint themselves as a calavera (skull) or calaca (skeleton). 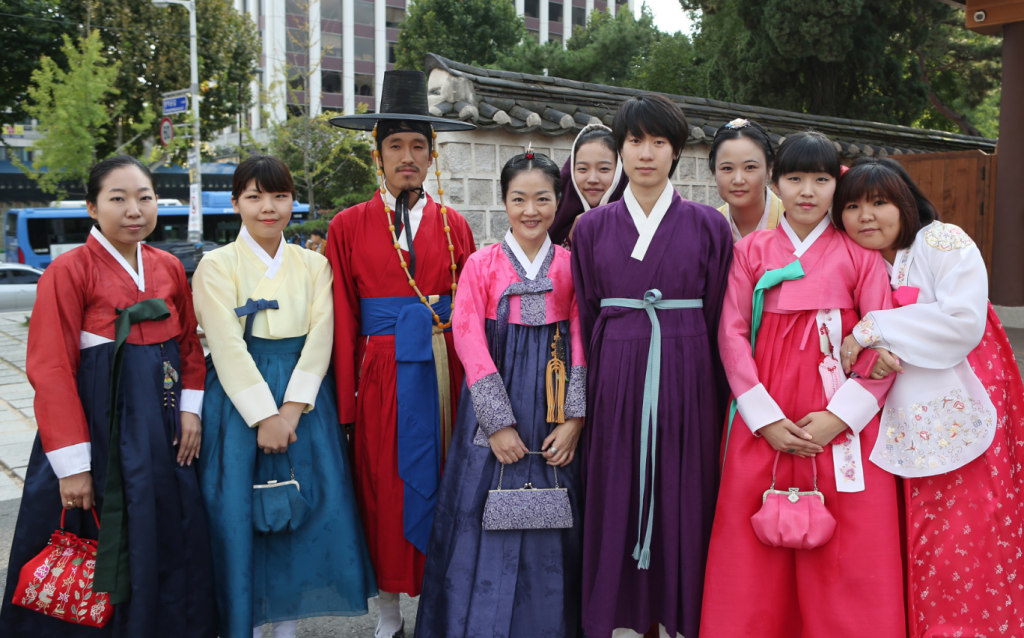 Chuseok, also referred to as Hangawi, is one of Korea’s major holidays. It takes place on the 15th day of the eighth month, which is when the full harvest moon appears in the sky (though the day before and after are also a part of the celebration).

On the morning of Chuseok, family members gather at their homes to hold memorial services (Charye or 차례) in honor of their ancestors. Freshly harvested rice, alcohol, and songpyeon (rice cakes) are eaten together as a family.

Families will also visit the graves of family members who have passed away (Seongmyo or 성묘), and, as with many traditions, the graves are swept and cleared of weeds – a symbol of duty and expression of devotion and respect.

Instead of costumes, Koreans will put on their Chuseokbim (Chuseok dress), adorning themselves with new clothes for the holiday. More traditional families will partake in traditional Korean wrestling (ssireum), and Korean women, dressed in traditional clothing, will join hands and perform circle dances while singing together on the first night of the full moon (ganggangsullae). 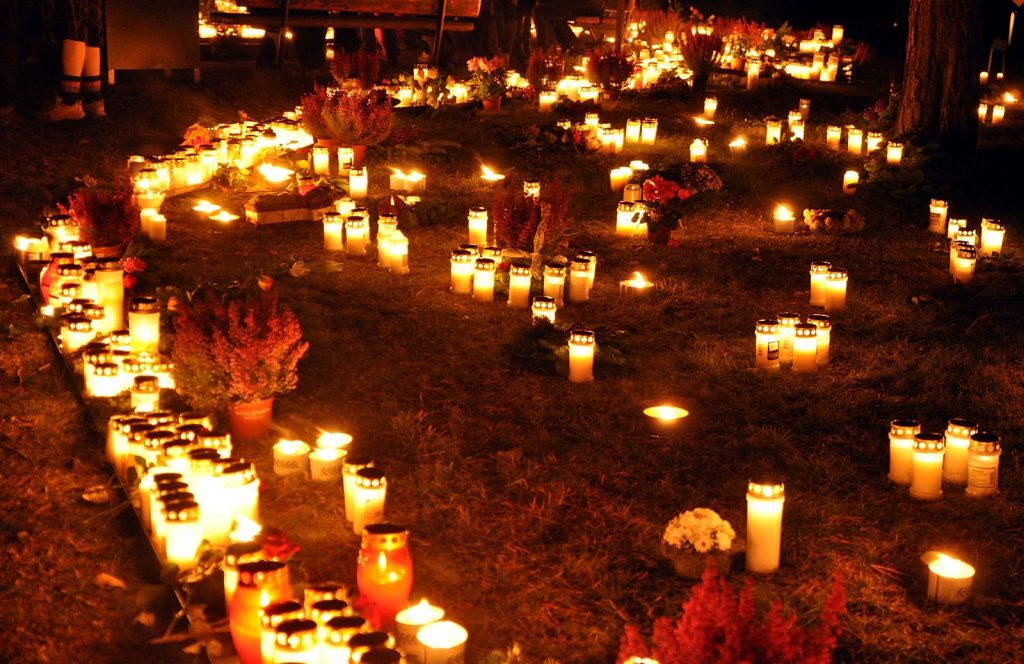 Name: Alla Helgons Dag or Allahelgonadagen
Day: November 1
What: Day of remembrance for those who have passed away
Celebrations: Lighting candles
History: ~ 1,000 years

Alla helgons dag is a solemn day of remembrance in Sweden that takes place on All Saints’ Day on November 1. Family members will light long-burning candles and place flowers by the graves of friends and loved ones who have departed so the candles stay lit throughout the weekend. It used to be that shops and offices remained closed on Alla helgons dag, but that has become far less common.

One of the most stunning places to be in Sweden on Alla helgons day is the UNESCO World Heritage Site, Skogskyrkogården (The Woodland Cemetery) in Stockholm, which is covered in the warm glow of candlelight every year. 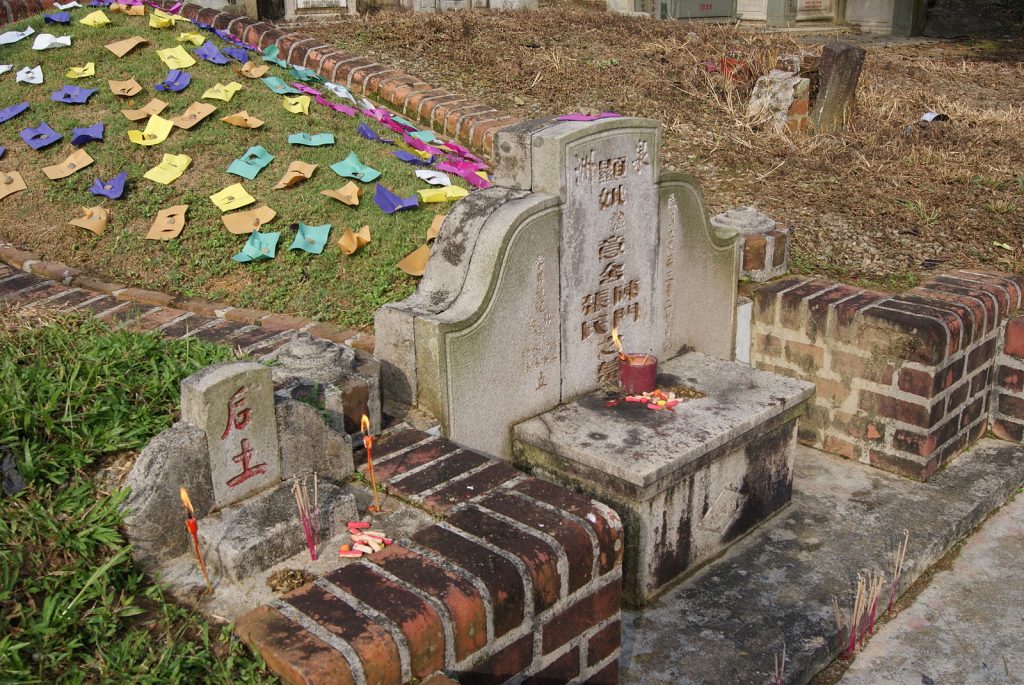 Qingming festival is a traditional Chinese day of the dead (also known as Tomb-sweeping day) marking the spring equinox and dedicated to honoring and celebrating the lives of past relatives. The holiday came about as a memorial ceremony for an official named Jie Zitui who took great pain to cut some flesh from his thigh to help feed a starving Prince (who had been unjustly sent into the mountains from a jealous concubine), Chong Er.

Once the concubine died and Chong Er returned to his kingdom, Jie Zitui returned to living in seclusion as the (now) King was engrossed in his prosperity. In an attempt to drive Jie Zitui from the mountain in which he lived, Chong Er ordered it burnt down and killed his once-savior. Ever since, that day has been renowned as Qingming.

Young and old alike visit grave sites and burial grounds to pray before their ancestors; weeds around the tomb are swept and cleared away, and their favorite food, tea, and wine are placed at the foot of their grave.

Joss paper (otherwise known as ghost paper) resembling money and other symbolic libations are burned in a gesture thought to allow the ancestors to receive these belongings in their afterlife. As the boundary between life and death is thought to be quite thin during Qingming, willow branches are placed as protective barriers used to ward off evil spirits on the front doors of homes. Kites are flown, families spend the day outdoors to greet the Spring, and firecrackers sparkle and snap in the night sky. 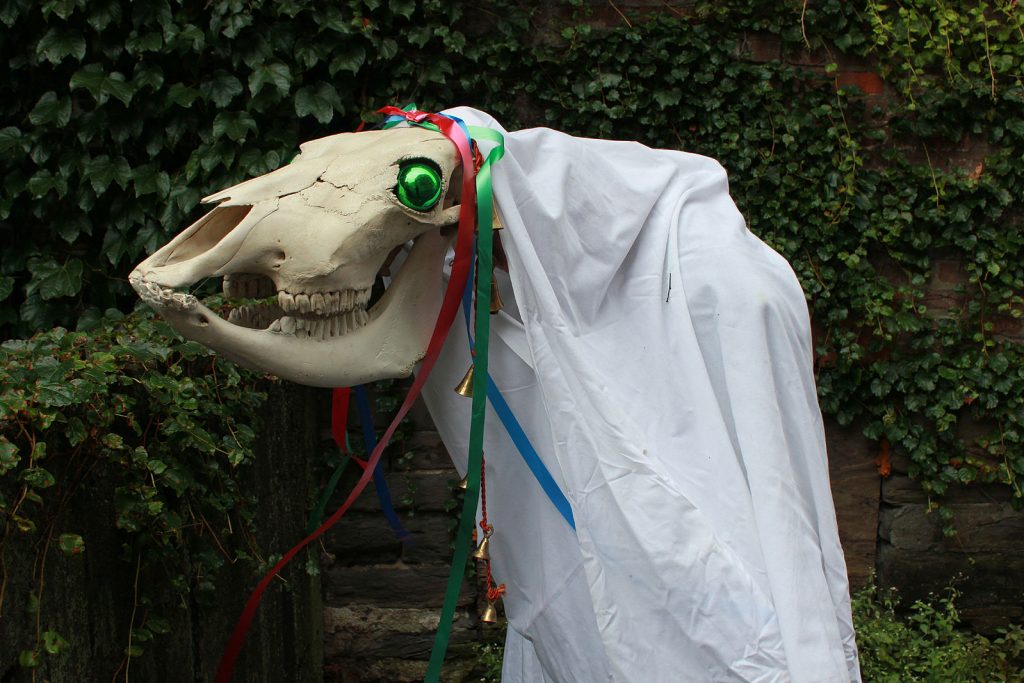 Name: Samhain
Date: From sunset October 31 to sunset on November 1
What: Commemorating the end of the harvest season, beginning of winter
Celebrations: Bonfires
History: ~2,000 years

Amid all the fun, games, and candy corn, the origins of Halloween (as we know it today) are often swept under the rug. Halloween, also known as All Hallows’ Eve, can be traced back 2,000 years to a pre-Christian Celtic festival called Samhain (pronounced “sah-win”), which literally means “summer’s end” in Gaelic. It was an annual meeting at the end of the harvest year in which the community would gather resources and bring the animals back from their pastures for the winter months.

It was also a day of supernatural transition, when the spirits of the dead were thought to cross over into the ‘other world’. Bonfires were a popular celebration ritual; sometimes two bonfires would be built side by side, and the people—sometimes even the livestock—would walk between them as a cleansing ritual (the fire mimicked the Sun, representing powers of growth). The bones of slaughtered cattle would also be thrown upon the bonfires, and the ashes of the fire were scattered after the fire had burnt out. Since then, the traditions have changed just ever so slightly. 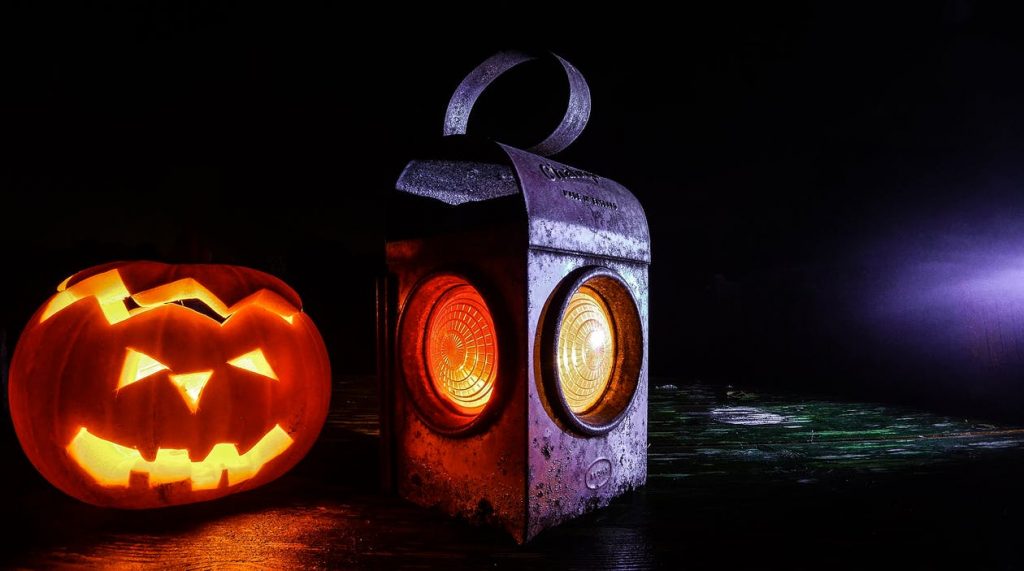 Halloween today is an amalgamation of all the days of the dead from different cultures across the globe (and across history). The day is most heavily celebrated throughout North America and other Western countries, but the rest of the world to gets in on the fun too as theme parks transform into ghoulish extravaganzas. Friends and family get together to carve pumpkins, throw a party or three, and decorate their homes with fake spider web and fog machines.

Though it doesn’t involve the traditional custom of honoring the dead, we certainly like dressing up as them—as werewolves, vampires, mummies, zombies, witches, superheroes, and any other mythical creature from the pages of a writer’s imagination.

And although Halloween is thought of as a time for children to go trick-or-treating, door to door, the craving for candy doesn’t subside with age. Where once we trick-or-treated down streets decorated with over-sized spiders and laughing coffins, the adults of Halloween make the yearly migration to their grocery stores to buy up all the heavily discounted Halloween candy.

Even something as seemingly universal as Halloween doesn’t always translate. Our free localization testing checklist can help you create a multilingual content marketing strategy.

We combine the best of what human intelligence and machine learning have to offer to bring your business to more people around the world—quickly, efficiently, and affordably.

Treat your company to the best localization solutions – contact us today to get started.