How many of you have read Harry Potter? Most of you, I suppose. And how many of you have ever read it in a language other than your native tongue or have thought about the process of translating a book that is filled with neologisms, wordplay and magic?

The Harry Potter series has become a cultural phenomenon. Each time a new book was published, millions of fans, dressed up like the book’s characters, were anxiously waiting in front of bookstores in England, so they could lay their hands on the freshly printed adventures of the young wizard. And those unfortunate ones who had to wait for the translation into their native language were even more desperate to get to know the plot of the new story before someone spoilt it for them.

The content was never made available to translators before the book was published, that’s why Harry Potter’s enthusiasts around the world had to wait so long for their native language versions. This brutal strategy had one more consequence – the translators had to work under extreme time pressure.

What do the translators themselves say about this prestigious but hard work?

Most of them admit that what motivated them most was children’s joy. They pinpoint that being able to deliver to kids their favorite book in their native languages was extremely rewarding. And the children’s role doesn’t end here — many translators say they took advantage of their kids’ help while working. They valued the perspective of those young readers as they were the target group for the whole series.

When it comes to the strategy, even though the volumes were huge and the deadlines short, most of the translators chose to work alone. Lia Wyler, the Brazilian translator, says that if she had wanted to hire an assistant, it would have had to be… her clone. She said she’d need someone with the exact same background, accent and coming from the same neighborhood to maintain the high level of accuracy and consistency. Language is collective, she says, but vocabulary is extremely individual.

You think that translating the best-selling book series in the world’s history (!) is every literature translator’s dream? Nope.

Viktor Golyshev, an award-winning English to Russian translator of William Faulkner, George Orwell and Thorton Wilder, wasn’t really pleased with the job. He had no interest in children’s literature and was widely criticized for moralizing, lack of fantasy and inaccuracies. When the fifth book came out, a whole team of translators was assigned to him, but it’s still mostly Golyshev who’s associated with the Russian translation of Harry Potter.

You can read more about the translators’ insights here

“There’s no need to call me Sir, professor”

Everyone who has ever read the original language version of Harry Potter has to admit that the book is excessively British. Professors calling their students by their surnames or “sirs”, students drinking butter beer (wait, teenagers drinking ALCOHOL at school and everyone is ok with that??) are only two things out of many others that would make foreign readers wonder about J.K. Rowling’s sanity. Those elements of the British culture were so unfamiliar to foreign readers that the translators had to somehow change or replace them.

That’s why in the Israeli version you won’t find Ron eating lemon sherbet (instead, he’s a chocolate sweets’ lover), and in the French version you will read about professor Rouge instead of professor Snape (“Rogue” sounds more French but the meaning and overtone stay the same).

Some of the Harry Potter translators chose to mix British elements with their native cultures, some left the original content and only translated it adding footnotes with explanations of cultural nuances. In cases of untranslatable content, Klaus Fritz – the German translator – actually came up with and added his own jokes and gigs just to retain Rowling’s humor and subtlety, adapted, however, to his native culture.

“Words are, in my not-so-humble opinion, the inexhaustible source of magic”

With so many neologisms, so much wordplay, and meaning hidden behind almost every name, translating Harry Potter was an extraordinary challenge for any translator.

Translators had to become creators when working with so many new words like muggles, pensieve or portkey. They had to keep the humor, sensitivity and subtlety of Rowling’s wordplay, adapted, however, to a new language and culture. How did they do that?

Some of the names were  transformed into more local characters, in other cases translators decided to just transliterate the name or leave it in the original form. Andrzej Polkowski, the Polish translator, created a thesaurus with more than 1,000 terms and their explanations. What is more, he added a “glossary for the curious ones” at the end of every Harry Potter book. He used it to show the readers the original names along with their meanings and etymology, as well as his translation of those names and the logic behind it.

If you’re curious about how the authors of different Harry Potter language versions managed to capture the wordplay and cultural references, take a peek into some of the examples:

Rowling’s creativity and her engagement in the writing process can be found in almost every name in the Harry Potter universe. Each character’s name is well thought-out and thus quite hard to be translated accurately. The character’s name often mirrors his or her personality. Here are some of the character’s names and their meanings, as well as the etymology of some charms and spells: 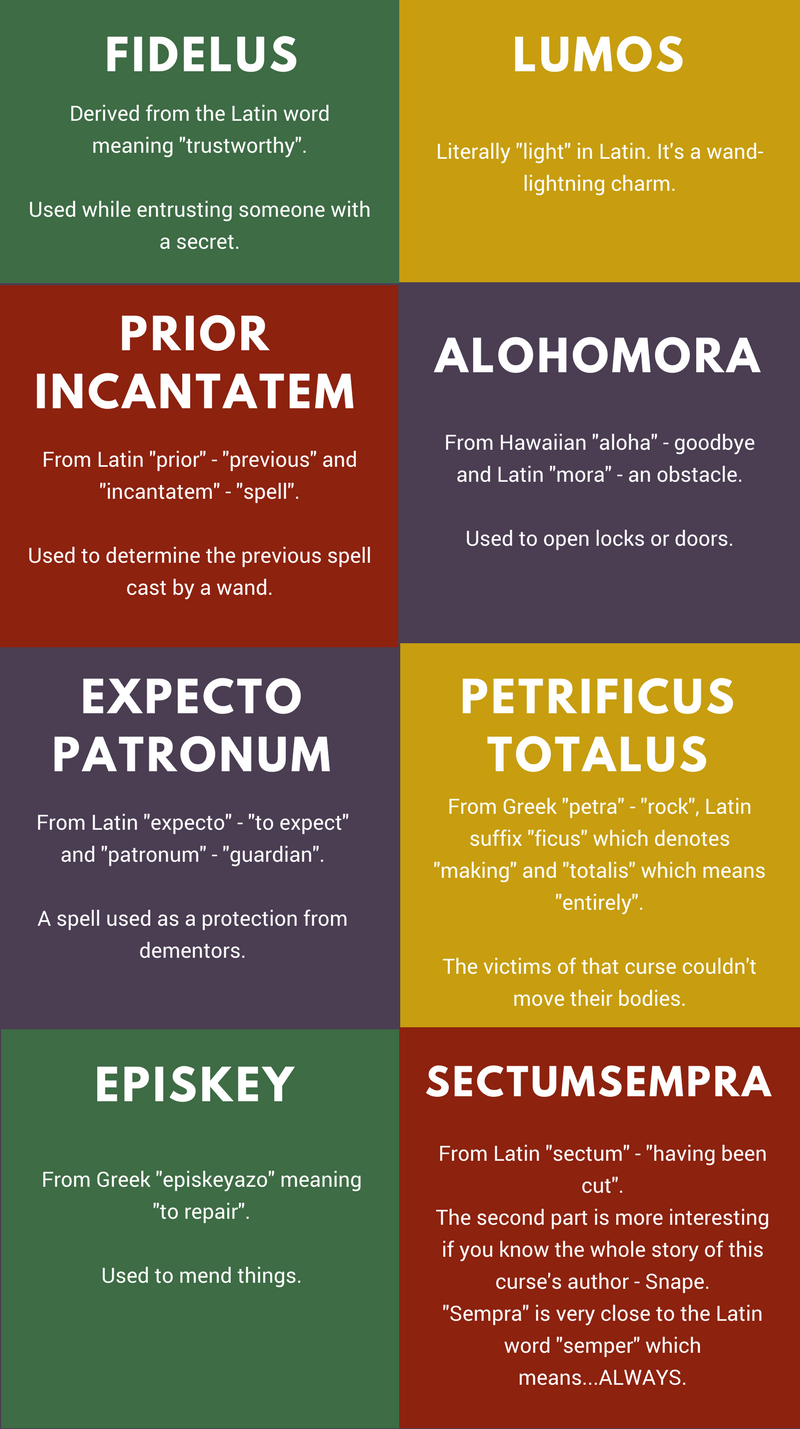 Is it still hard to imagine how difficult literature translation can be? Try to translate the Sphynx riddle (from Harry Potter and the Goblet of Fire) into your own language:

First think of the person who lives in disguise,
Who deals in secrets and tells naught but lies.
Next, tell me what’s always the last thing to mend,
The middle of middle and end of the end?
And finally give me the sound often heard
During the search for a hard-to-find word.
Now string them together and answer me this, which creature are you unwilling to kiss?

Translation of literature is an art and requires an extremely skilled translator. Harry Potter and other fantasy books may look like a translator’s nightmare but given the fact that millions of people around the world can enjoy reading about the adventures of the young wizard in so many languages, I guess we can say that all was well.

If you want to read more about literature translation, click here.