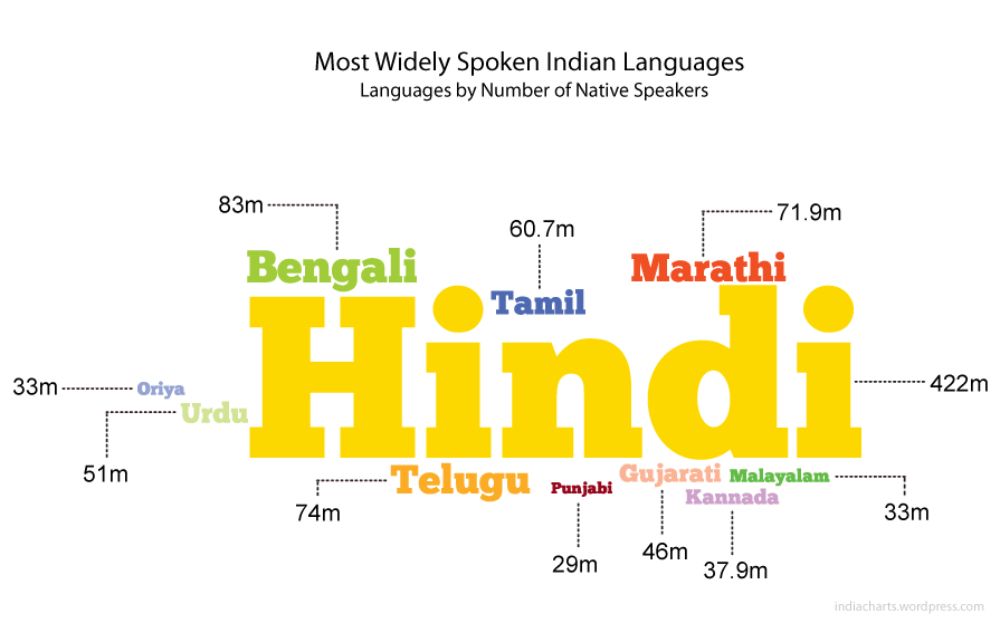 Language diversity in India is but one of its unique qualities.

Take geography for example. India has the snow-capped Himalayan mountain peaks in the north, and the arid deserts of Rajasthan in the west.

Then there’s a multitude of religions – Hinduism, Islam, Christianity, Buddhism, Jainism, Sikhism, Zoroastrianism – and even religions within religions called sects.

And then comes the linguistic diversity of the country. To be precise, India has 22 major languages, written in 13 different scripts, with over 720 distinct dialects. This was aptly surmised by the eminent sociologist A R Desai when he said:

‘India presents a spectacle of museum of tongues.’

Every August 15th, India celebrates independence from the British rule. 2022 will therefore mark 75 years of Indian languages revamping, progressing and evolving. Why? Speakers of a particular language change from generation to generation, and so do their needs.

For instance, English was spoken back in 1947 when India attained independence, and it’s still spoken now. English back then was the common functional language of the masses, and today it is a combination of many regional varieties (including, of course, Hinglish words and the popular SMS lingo).

Messaging and emailing started initially in English, but now it is branching out to the vernacular languages. We were taught to speak in English and only in English in school, but now universities are offering additional marks as an incentive to move on to other languages. And logging in to our email accounts using our own language rather than English? The icing on the cake!

1.What is India’s national language?

Surprisingly enough, they don’t have one! India has designated ‘official’ languages, specified ‘classical’ languages but no national language.

2.Which Indian language(s) boast more speakers in the whole world than French or German?

3.Which word is the second longest palindrome in the English language?

India’s very own – MALAYALAM. It’s actually a Dravidian language spoken in the Indian state of Kerala

4.What is the most computer-friendly language?

According to NASA scientist Rick Briggs, Sanskrit is the most precise, predictable and computer-friendly language.

5. Which is the fourth most spoken language in the world, even more than English?

On Independence Day, let us also celebrate the language diversity of India in addition to independence.

There would be no better way than to sum it up with the words Shashi Tharoor penned down when India was celebrating its 61st Independence Day:

‘Indian nationalism is a rare animal indeed. The French speak French, the Germans speak German, the Americans speak English – but Indians speak Punjabi, or Gujarati, or Malayalam, and it does not make us any less Indian.

It is a reality that pluralism emerges from the very nature of our country; it is a choice made inevitable by India’s geography, re-affirmed by its history and reflected in its ethnography. Let us celebrate our Independence on August 15 in a multitude of languages, so long as we can say in all of them how proud we are to be Indian.’

A professional translation agency can help you get it right, whether you are translating English into another language or are adapting from one dialect to another.