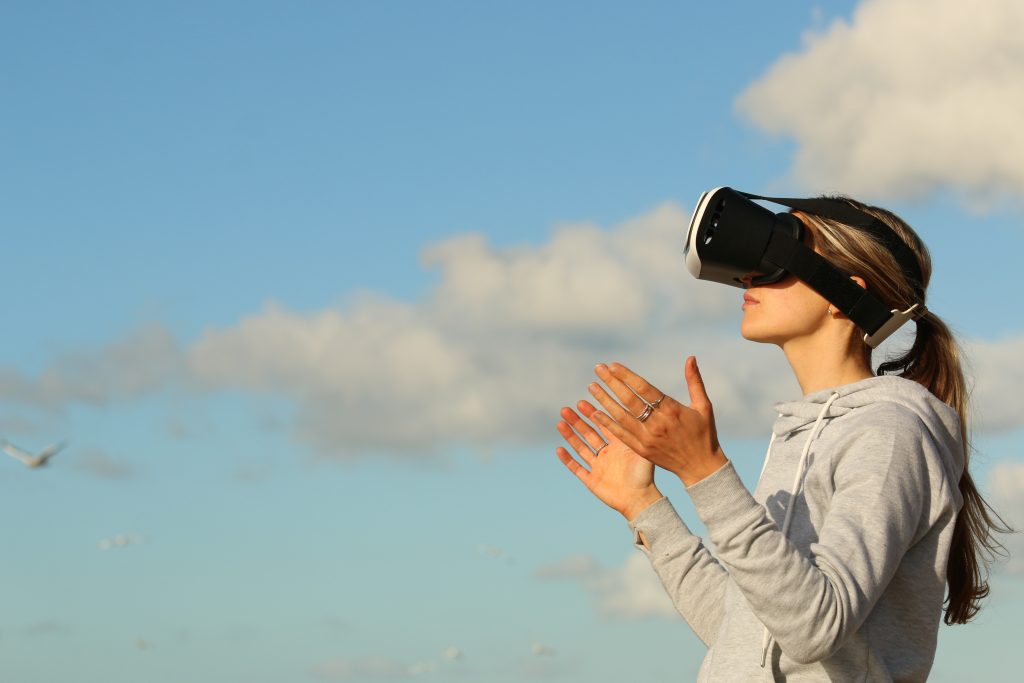 Virtual Reality (or VR) is on the rise. With 6.7 million active users in 2015, 43 million at the end of 2016, and a predicted 171 million users by the end of 2018, it is forecasted to be one of the most explosive and important technologies around.

Emerging tech companies have jumped on this fast-growing multibillion-dollar industry with the release of the Kickstarter poster child Oculus Rift, the gaming-juggernaut Vive, the PlayStation VR, or even the more accessible Samsung Gear VR system.

There are, to say the least, a steadily growing number of ways to get plugged in and enjoy the latest video gaming experiences out on the market.

Whether you’re shooting pool with your friends, or treading the creepy backwoods of Louisiana in Resident Evil 7, there are plenty of VR games that seem like a natural, mind-blowing, and endlessly fun extension of traditional gaming.

But what if the games we all know and love took a darker turn?

Charlie Brooker’s hit television series Black Mirror is no stranger to taking the latest technology and bringing it to the extremes.

In an episode titled “Playtest”, we follow the story of a man named Cooper. At the start of the episode, Cooper is stuck in London after having his credit card information stolen. While there, he uses an app to find some quick work to afford a plane ticket home.

After accepting a job to “playtest” an enhanced virtual reality experience under development, Cooper finds himself in a horrifying faux-mansion set with no way out. Though he’s repeatedly assured there’s no way he can be harmed, Cooper finds the experience to be a little too real for comfort.

Needless to say, the Black Mirror virtual reality episode will make you shiver in your boots.

Before going any further, we must emphasize the future prospects for virtual reality isn’t all ‘doom and gloom’. The technology does indeed have the potential to provide a lot of joy.

Imagine being able to fly through space in just the way you had always dreamed it. You could relive a memory, or travel to the most remote and beautiful lands. You could revisit a loved one you had lost. Or, you could roam the earth side-by-side with dinosaurs, mammoths, and other extinct beasts.

Here are a few ways Black Mirror might be predicting a terrifying future for virtual reality:

Disclaimer: there will be a few spoilers below.

Virtual Reality Without the Bloat of Hardware

If you want to plug into an immersive VR world today, you’re going to have to invest in the expensive equipment required to power the experience. Gamers have to don a bulky headset, install a series of tracking cameras around their VR ‘gaming area’, hold onto some motion controllers, and purchase an impressive computer.

All of this brings an experience that is still very much a work in progress; motion sickness and low resolution visuals still get in the way. But what if we were able to have a virtual reality experience without all of that literal ‘baggage’?

Black Mirror isn’t the first to conceptualize VR without bulky headsets. But their innovative – if a tad invasive – imagining of the future processes is alarming.

In the episode, Cooper is brought into a clinical white room, and is injected with a miniature device on his brainstem. The purpose of which, we are told, is to download the virtual reality experience directly into his consciousness.

This little device is what enables Cooper to enter the game company’s virtual world without the need for additional componentry – aside from a small, portable earpiece.

The world as we know it is becoming ever-more invasive; fitness trackers have access to our biological data, our phones tell secrets about where in the world we are and have been. “Free” social media sites sell big advertising companies our interests, our personal profiles, our political interests, and more. Who is to say what the next step will be in this continued invasion of our privacy?

Perhaps, in a continuation of the Black Mirror episode, SaitoGemu (the gaming company responsible for Cooper’s untimely demise), successfully released their VR experience to the mass market. Thousands, millions, and perhaps even billions of people would flock to join the technological revolution; an escape from their less-than-thrilling existence.

Those people would, in essence, sacrifice their physiological privacy – and perhaps even control of reality – to this gaming company. They would, for the sake of ‘convenience’, walk around with digital nodes implanted in their brain stems.

Ultimately, they would be slaves to next-generation advertising; perfectly tailored to each individual based on the data these nodes pulled, and perfectly woven into this alternate reality.

Even more worrying, developers are already implementing this technology.

Nevermind by Flying Mollusk, uses the player’s biofeedback to adjust game difficulty and turn a player’s experience into a personalized nightmare.

In “Playtest”, SaitoGemu’s virtual reality system is either so in-tune with Cooper’s biological data that is ‘seems’ to be able to read his mind, or is actually able to read his mind. Information about his heart rate, brain function, and state of mind are all used to take advantage of Cooper in his most vulnerable state.

When Cooper realizes the system is using his own memories against him, it adjusts to incorporate other, deeper fears. For a computer to “read minds” and have the ability to materialize our greatest fears out of thin air is a terrifying prospect.

Considering the fact that machines do not feel compassion the way humans do, they could, in essence, decide never to free you from your virtual reality horror show. When something has such a deep control over your mind, how would you escape, much less survive the experience?

For the moment, we are safe from the fear of Hollywood’s multitude of technological dystopias. However, artificial intelligence is creeping closer to fact than fiction and it’s raising some serious concern.

Right now, developers are creating software that can, in essence, “read our mind”. Or at least, they are developing and implementing the technology to read human facial expressions and emotions, and adjust game dynamics based on that information.

“Any face, any place, any interface – in real time.” boasts Affectiva. The company’s promotional video showcases normal people, inside their homes, being monitored via their laptop webcams. Any place indeed.

If there’s one thing sci-fi has taught us, is that VR has the potential to be ‘better’ than real life. Who wouldn’t want to spend the rest of their lives in a world that’s full of their wildest fantasy? Unless you happen to be in Black Mirror, that is.

In “Playtest”, Cooper begins to lose his grasp of reality as the artificial intelligence digs deeper into his mind. When he starts his virtual journey, Cooper is only able to see and hear his virtual imaginings. Any attempt to touch them would make them fizzle like an old-school hologram. But, as the episode continues, Cooper’s visions become more real; he can even touch them and feel pain because of them.

If the idea of boundless fear doesn’t make you nervous, maybe too much comfort should. Aldous Huxley’s Brave New World and The Matrix portray a human race pacified and enslaved by the escape of VR. Could one of those predictions come to fruition instead?

Either way, it seems like we’re moving in that direction. Game creators are trying to make virtual reality more immersive than ever. It’s only a matter of time before our virtual experiences affect our consciousness as well as our motor functions.

In fact, Intel is already working out ways to do just that with their RealSense™ technology.

There are also various critics who argue violent games should not be developed for virtual reality for this very reason; it’s simply too realistic and could result in players becoming more violent in the real-world.

If you’ve ever played the likes of Grand Theft Auto, Halo, and/or Mortal Kombat, then you have definitely committed at least a few of these unspeakable acts: murder, assassination, and all kinds of gory mutilations.

In-game toxicity in online gaming is the next challenge to overcome.