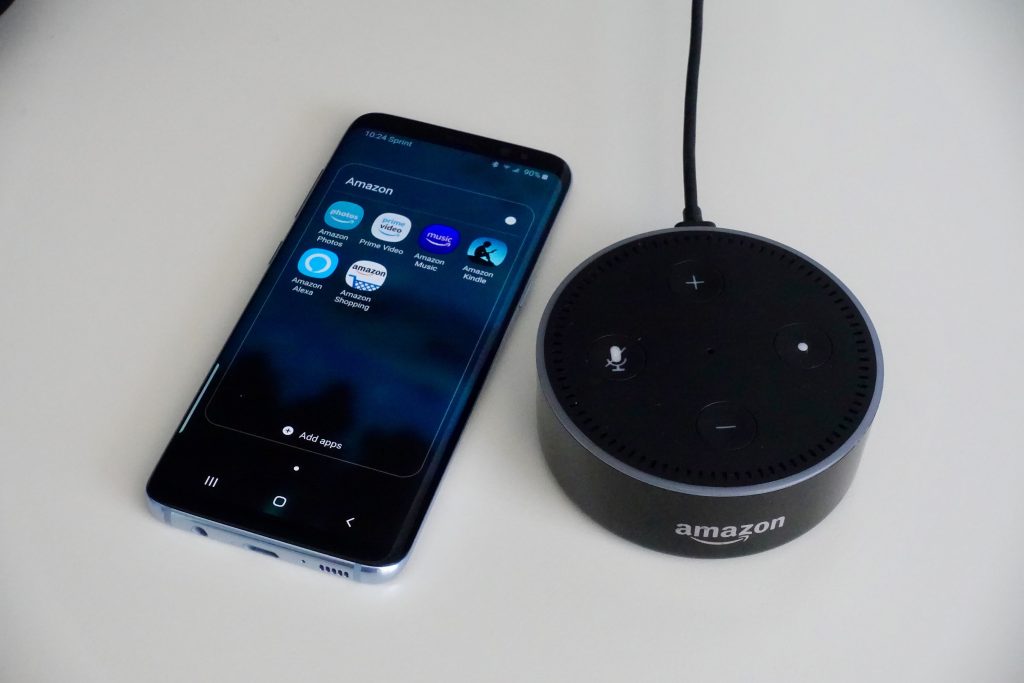 Demand for innovative voice controlled devices has experienced rapid growth over recent years, and all the research indicates that this growth shows no sign of slowing down:

Voice-enabled products use one of the most innate human behaviors to search for information, issue commands, and interact with a whole range of devices.

Recent improvements in speech recognition technology are putting voice-enabled devices at the center of many people’s everyday lives.

Even those who aren’t yet comfortable with the idea of giving voice-activated products a prominent place in their home, car, and workplace are being inspired to make a foray into the realm of speech recognition technology by mobile app developers who are creating hands-free solutions for a wide variety of tasks.

Developers are also encouraged by Amazon, Google, Apple, and the like to create voice-activated apps, or ‘skills’, to enhance the functionality of voice assistants.

In this article, we’ll mention a selection of the latest voice-activated apps and add-ons available to consumers today.

Voice-Activated Apps for a Multitude of Tasks

Voice controlled video games allow users to interact with characters, control play, communicate with other players, and much more.

The gaming industry is also making inroads into the new arena of smart assistants. Amazon, for example, has released a Skills Kit specifically for developers looking to design games for Alexa.

A popular downloadable gaming app based entirely around voice control is Scream Go Hero. This features an on-screen ninja that is constantly running and can only overcome the various obstacles that he encounters by leaping over them.

The fun part is that the ninja’s movements are controlled entirely by the volume of the player’s voice.

To see the game in action, here’s TV host Jimmy Fallon playing it.

Most hi-fi enthusiasts would agree that, while all smart speakers are undoubtedly smart, the speakers are not that great (to their refined ears, at least). However, there are several ways to integrate voice control into the high-spec speakers of your hi-fi system.

The Amazon Echo Dot connects to just about any pair of active speakers, soundbar, or integrated amp with a 3.5mm aux input. Once the connection is made, all of Alexa’s audio will play through the connected system.

An alternative approach is found in the Sonos One smart speaker, which offers a winning combination for smart hi-fi fans: a high-performance speaker with Amazon Alexa and Google Assistant built in.

Control in-Car Systems with Your Voice

You may not be able to drive using voice commands (yet), but the driving experience is becoming increasingly hassle-free as hands-free technology is integrated into vehicles.

If you ask, Alexa will even open your garage door and switch on a smart light when you get home.

The compact device plugs into a USB or 12-volt outlet and mounts to the car’s dash. With 8 microphones and far-field technology, the Echo Auto can filter out any other in-car sound, such as the radio, air conditioning, or road noise, so drivers can concentrate of driving and ask Alexa to take care of everything else.

Along with facial recognition, voice is increasingly being used as a biometric identifier on everything from home-based devices to corporate security. The banking, financial services, and insurance industry, for example, is finding that recognizing a customer’s voice can prevent a lot of fraud.

According to HSBC UK, their innovative voice biometrics system, Voice ID, prevented almost £249 million of customers’ money from falling into the hands of telephone fraudsters in 2020. The success of the system means that the bank is now enrolling around 14,000 customers in Voice ID each week.

Not only does Voice ID check that customers are who they say they are, it provides a database of fraudsters’ voice prints to cross check against new incoming calls.

Add Your Own Alexa Skills

Anyone with an Echo speaker, or an Alexa-enabled device, can find a growing library of new features in the Alexa app’s skills store or by speaking the appropriate voice command to auto-enable them. Here are some for you to try.

With 200 million downloads, iTranslate is the world’s leading independent translation and dictionary app.

iTranslate‘s mission is to enable travelers, students, business professionals, employers, and medical staff to read, write, and speak in over 100 languages. This app brings us one step closer towards real-time, universal translation and communication across borders.

To help their users avoid those pesky international data costs, the app even comes in an offline mode.

Acting as a personal translator in the palm of your hand, the app is available on all iOS devices as well as Android and Windows phones. All you have to do to start a translation (after you have the desired languages selected), is tap and hold.

Once you lift your finger off the screen, the app will automatically detect which language was spoken, process the speech, and speak the translation out loud as well as providing an on-screen text version.

The Wayne Investigation is an immersive, Batman™ mystery adventure game for Amazon Alexa developed by Warner Bros. The objective of the game is to solve the murder of Bruce Wayne’s parents.

“Alexa, open The Wayne Investigation” are the five simple words you need to utter to get started.

One Piercing Note is the first chapter available through Runescape Quests: a captivating mystery game where the player becomes the voice of a courageous adventurer, tasked with solving a murder.

The crime scene investigation soon takes a turn for the unusual as dark, demonic secrets are uncovered in the seemingly serene abbey.

Showcasing dramatic voice acting and atmospheric music wrapped in compelling voice-activated gameplay, One Piercing Note is one of the most well-received Skills on Amazon’s ASK platform.

Reminiscent of text-based PC games (where you could type in directions, commands. and answers to questions navigate through fantastical worlds), Runescape Quests works in the same way – except instead of text, you use your voice.

As a player, you’re able to literally speak to other in-game characters (such as merchants) as well as control your characters’ actions by using commands such as, “Pull the lever”.

You can also ask Alexa to “stop,” “pause” or “resume gameplay” using voice.

Though the game itself has been criticized as having too linear of a story, most others have commented on the games’ ingenuity and await in anticipation for the next chapter to be released.

Here are some other “skills” you can put to good use through speech recognition.

Skills to get fit

There are many Alexa skills that help to improve your health and wellbeing.

Workout Coach, for example, is designed to get your muscles working with an intense daily workout lasting no longer than 10 minutes.

If you want something longer, this skill is customizable. You can even choose the personality of your coach.

Alexa Routines let you program Alexa to perform a series of actions by speaking a single command.

For example, you could create a night-time routine to turn off the lights, switch off the TV, adjust the heating, and set a morning alarm, simply by saying, ‘Alexa, bedtime’.

A skill to find Alexa skills

Of course, the easiest way to discover any new skills Alexa has been to simply ask it.

Skill Finder is a feature that can update you on all the available skills, whether by date, or by category. Whatever you want to do, there’s probably a skill to help you.

Make your own skills

If the skill you’d hoped for doesn’t exist, there’s probably a workaround solution using the IFTTT (If This Then That) feature.

Applets connects apps, devices, and services from different developers in order to trigger customized the outcome the user requires.

Speech Data to Meet Your Needs

What type of speech data do you need?

Contact Summa Linguae today and tell us about your project and we’ll customize a data collection plan to your exact needs.