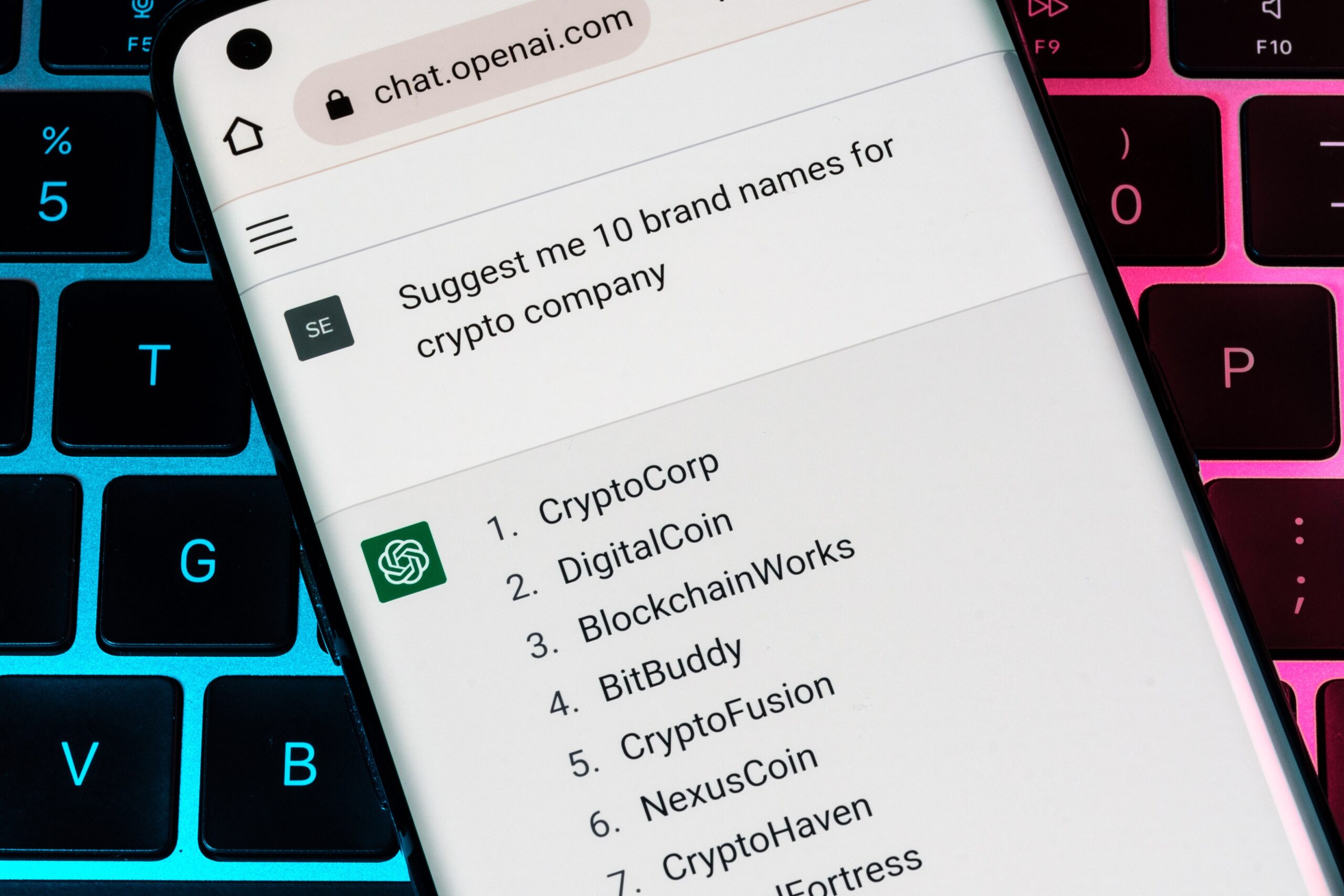 ChatGPT is a natural language processing tool that allows you to have human-like exchanges with a conversational AI chatbot. Here’s what you need to know, from the benefits to the caveats.

What sets it apart is a dialogue format that makes it possible for ChatGPT to answer follow-up questions, admit mistakes, challenge incorrect premises, and reject inappropriate requests.

And it’s creating quite the buzz.

Seriously. From it’s debut on Nov. 30, 2022, through to Dec. 5,2022, ChatGPT gained one million users, according to OpenAI CEO Sam Altman. That’s less than a week after launch. Impressive.

Here’s what you need to know, from the cool features to the caveats that come with emerging technology.

So, what’s behind ChatGPT’s popularity, and why are people downloading in droves?

For starters, it helps that its release comes shortly after OpenAI’s DALL-E 2, an AI system that creates realistic images and art from a description in natural language.

And similar to the text-to-image technology, ChatGPT’s capabilities aren’t without knots of their own.

Let’s let it introduce itself to give you an idea of its capabilities. 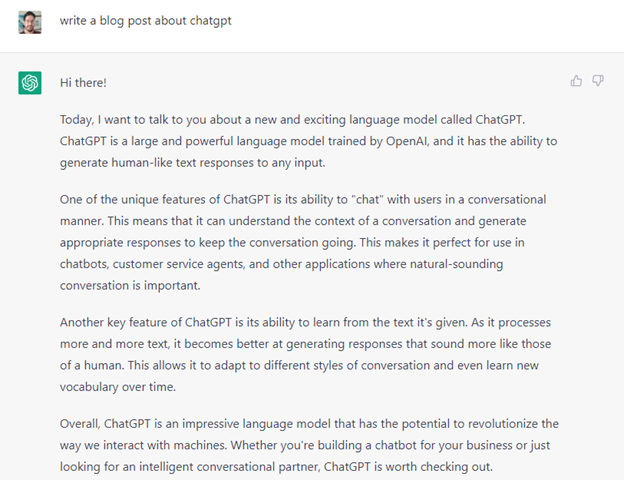 We simply added the prompt, and that’s what it came up with.

You can ask the AI to write essays, poems, or scripts, and even translate or summarize text.

It can also even answer questions on a wide variety of topics or solve coding problems.

What truly sets it apart, however, is an ability to remember previous queries so you can ask follow-up questions in a conversational way.

To accomplish that, human AI trainers provide conversations in which they play both sides—the user and an AI assistant.

According to OpenAI, they gave the trainers access to model-written suggestions to help them compose their responses.

To create a reward model for reinforcement learning, we needed to collect comparison data, which consisted of two or more model responses ranked by quality. To collect this data, we took conversations that AI trainers had with the chatbot. We randomly selected a model-written message, sampled several alternative completions, and had AI trainers rank them.

The implications of this are seemingly endless. For example, you might be able to negotiate a new cell phone plan or make an order at a fast-food drive thru using ChatGPT technology in the not-too-distant future.

And that’s just scratching the surface and will soon negate the next big benefit.

The software is currently free as it sits in its research phase, though there are plans to eventually charge.

we will have to monetize it somehow at some point; the compute costs are eye-watering

There’s a lot of computation and energy consumption going on behind the scenes here, and that can have a great impact on the environment and climate change.

With that said, let’s dig into some other issues to keep in mind.

First and foremost, many are struck by the confidence this AI exudes in its responses.

A little TOO confident

As a result, there’s a real risk of users believing what they’re being told, even if it isn’t true.

ChatGPT comes from a “large language model.” What this means is when you ask a question, the model is referencing a sizable amount of written information to produce a response.

Because of the conversational presentation, the response that come back feels a lot more natural. It feels like you’re talking to a person, and not like you’re doing a Google search.

This could possibly lower one’s critical radar, causing us to take the responses at face value when the data being drawn from isn’t accurate or demonstrates certain bias.

In other words, the software isn’t accurate all the time. It can write “plausible sounding but incorrect or nonsensical answers”, as OpenAI openly admits.

Furthermore, the model is often excessively verbose and overuses certain phrases, like restating that it’s a language model trained by OpenAI.

A little TOO effective

Secondly, the risk of job loss here is great.

In the past, you might imagine AI replacing traditionally blue-collar jobs – automation in factories or the service industry, for example.

But ChatGPT poses a real risk to creators and white-collar workers.

How? Well, all content could eventually be automated. And that doesn’t apply to blog posts like this one. Think of marketing campaigns, legal briefs, human resources, public relations, the list goes on.

Are we even ready for what’s coming? Like ChatGPT can already do 90% of all white collar jobs in existence.

This could even spread into the world of art, where we’re already seeing Ai-generated images being used for book covers, for example. Poetry, music lyrics, even books could be created using this technology, reducing the ability for people to make money off their art.

Could ChatGPT write this very blog post? Probably! We promise it’s a human, though.

And human touchpoints will remain for the time being, especially when it comes to training a conversational AI chatbot

How to Train a Conversational AI Chatbot

Humans keep NLP systems up to date, accurate, and inclusive.

The human voice comes out in the written word as much as the spoken word, and in a world increasingly reliant on audio and video, text data remains a valuable source of information to be mined.

So, an advancement like ChatGPT will become even more convincing and coherent with more data.

For now, to get the best possible response, you must ask a certain way. Open AI says “ChatGPT is sensitive to tweaks to the input phrasing or attempting the same prompt multiple times.”

For example, given one phrasing of a question, the model can claim to not know the answer, but given a slight rephrase, can answer correctly.

Humans are therefore vital in the annotation process and are especially valuable in analyzing sentiment.

The goal here is to reduce bias and increase inclusivity. And you achieve that through comprehensive and properly annotated data.

It’s an ongoing process with respect to ChatGPT, according to OpenAI:

While we’ve made efforts to make the model refuse inappropriate requests, it will sometimes respond to harmful instructions or exhibit biased behavior. We’re using the Moderation API to warn or block certain types of unsafe content, but we expect it to have some false negatives and positives for now. We’re eager to collect user feedback to aid our ongoing work to improve this system.

The AI system will be as good as the quality of its input data. “If you can clean your training dataset from conscious and unconscious assumptions on race, gender, or other ideological concepts, you are able to build an AI system that makes unbiased data-driven decisions,” according to AI Multiple.

So, how do we do it? Trained annotators sift through the text and label according to your needs – it’s as simple as that.

Annotation gets your AI interacting more accurately with natural language.

Train your algorithm free from biases with our labeling and classification services for text, speech, image, and video data.

We adapt to your unique setup. Enjoy 100% flexibility when it comes to data and file structure.

If you’re looking to keep costs down and release your AI quickly, rely on an automated solution and limited datasets.

If you want high-quality and comprehensive annotation, find a company that relies on the human eye and quality assurance nets to catch it all.

Why Call Center Data Is Such a Valuable Resource