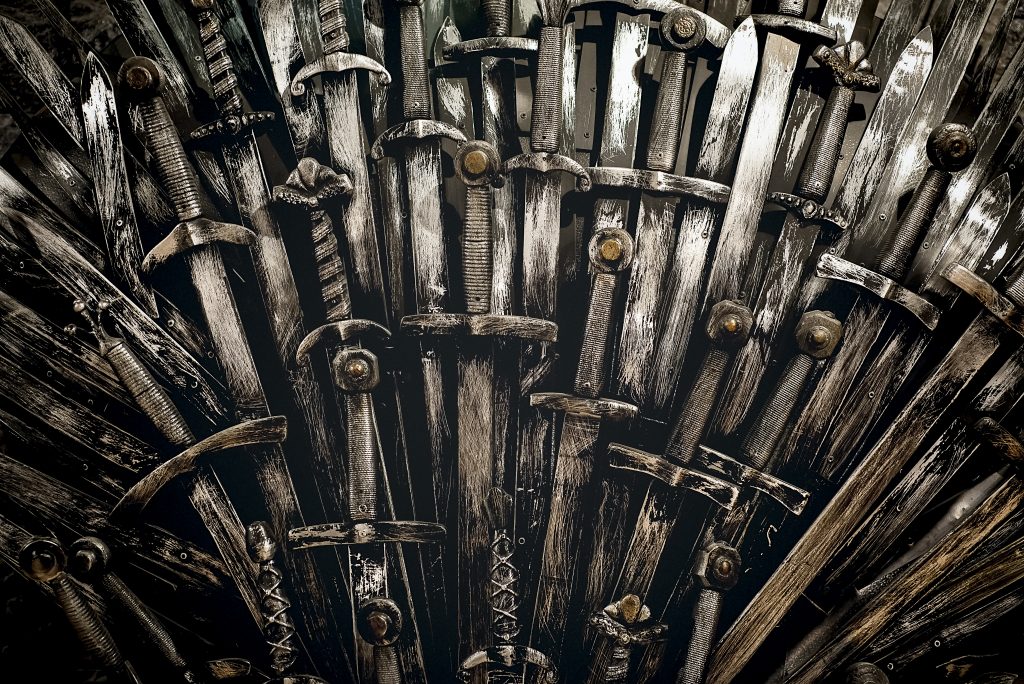 The 8th and final season of Game of Thrones was weirder, darker, and bloodier than ever. In all the chaos, don’t miss one of the most interesting aspects of the whole show – the languages.

Game of Thrones is a pop culture phenomenon on the same level as Lord of the Rings and Harry Potter. However, these franchises all provide real challenges for translators.

Not only did the authors make up a lot of words (like muggle in Harry Potter), their creators also brought to life new, complete languages.

Here’s a little compendium that may be of interest not only to the enthusiasts of the books or series, but also those who just love linguistics.

The Languages of Westeros

At first, the main focus of the books and the TV series is on Westeros, one of the four known continents in the world of Game of Thrones. The others are Essos, Sothoryos, and Ulthos.

Even though the culture of Westeros is diverse and its history is long and fascinating, the languages of Westeros are pretty boring.

People of Dorne, the Iron Islands or The Vale of Arryn all speak the same language – the Common Tongue. It’s most widely used in the show and in the books as the lingua franca of the whole continent.

It was introduced around six thousand years ago by the Andals. Yet, as every die-hard fan of Game of Thrones knows, the Andals were not the first people living in Westeros.

Before the Seven Kingdoms were established as a result of the invasion of the Andals, the First Men spoke the Old Tongue.

This language is still remembered and sometimes used by the free folks or giants who live beyond the Wall.

George R.R. Martin didn’t actually write the languages of Essos. The authors of the show knew how madly popular the books were and wanted to get into the fandom’s good graces. They hired a true language whisperer – David Peterson, known also for inventing and writing down languages like Kinuk’aaz from a TV show Defiance and two languages of Essos – Dothraki and Valyrian.

You can be sure that every time Daenerys or a Dothraki warrior says something in the show, it’s not just some random gibberish – they speak a real language with its own grammar and vocabulary.

Valyrian is actually not a language, but a group of them. It comes from the High Valyrian – the old language of Essos (which served as a universal language on the continent, just like the Common Tongue in Westeros).

High Valyrian went out of everyday use after the destruction of the realm of Valyria. We can assume that nowadays, Daenerys is the only native speaker of High Valyrian, as the house Taergaryen was the only one from Valyria that survived to this day.

You have probably heard her saying dracarys a few times (even though usually few people stay alive after those words have been spoken). Valar morghulis and valar dohaeris (“All men must die” and “All men must serve”) are another two examples of High Valyrian.

After the fall of Valyria, the common tongue of Essos evolved into a group of languages called the Low Valyrian or the Bastard Valyrian. It’s not sure either whether the variants of the Low Valyrian should be called languages or just dialects.

For example, each of the nine free cities has its own variant of the Low Valyrian – Pentoshi in Pentos, Braavosi in Braavos, Lorathi in Lorath, and so on.

Interestingly, David Peterson – the creator of the language – said that Jacob Anderson (who portrays Grey Worm, an unsullied soldier) speaks the language better than Peterson himself ever could.

Dothraki is a language spoken by the horse-riding, nomadic tribe of the same name. As a result, most of the vocabulary is somehow bound to horses.

For example, to ask “How are you” in Dothraki you should say: Hash yer dothrae chek?, which literally means “Do you ride well?”.

David Peterson, who also created Dothraki language, credits Russian and Arabic as his inspiration. He also said that the vocabulary is based mainly on Genghis Khan-era Mongolian, because they share some experience and lifestyle with Dothraki.

Peterson often talks to Game of Thrones’ fans who ask him for translations. A student asked him to translate “sociology girl” into Dothraki to get a tattoo with this inscription. Peterson explained that sociology doesn’t exist in that world, neither does a word for it. He proposed Nayat fin avitihera vojis sekke which literally means “A girl who stares at people too much”.

This, and the fact that there even is a tongue twister in Dothraki (Qafak qov kaffe qif qiya fini kaf faggies fakaya (“The trembling questioner crushed the bleeding boar that squished a kicking corn bunting”), shows how serious Peterson is when it comes to inventing a language.

Other Languages of Essos

A language of the magical incantations which originated in the far east. You could hear it used by Melisandre or Mirri Maz Duur – the witch who cursed Khal Drogo.

Lhazar is a language spoken by the shepherds of Essos. It’s only mentioned a few times in the books, and never heard in the show.

The language of Qarth – very difficult to learn by foreigners, so the people of Qarth usually opt to speak the Common Tongue to visitors from Westeros. It is used in the show by Xaro Daxos – the man who tries to steal Daenerys’ dragons.

Also called the Great Tongue – a simplified, pidgin version of the Old Tongue. Spoken by the giants beyond the Wall.

The language of the White Walkers, resembling cracking ice. Unfortunately, despite being created, the language is not used in the show. The producers decided to use some icy sound effects.

At Summa Linguae Technologies, we have a great appreciation for creativity in language and translation. More importantly, we know how effective translation solutions can positively impact your business.

While English is still by far the most dominant language in business, the language of the customer reigns even more supreme!

Your website, products, or services must be translated and localized into these languages to show off what you have to offer to international customers.

Find out more about how we can help your business grow.